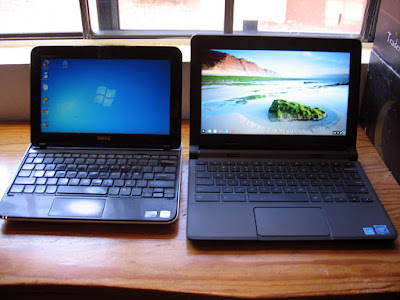 
Yep, after talking about it on and off for over a year now, I finally bought myself a Chromebook. I went with the Dell Chromebook 11, the new 2015 model with dual core 2.16 gigahertz Celeron Processor and 4 gigs of ram.

I originally intended to get the one with the faster Pentium i3 processor, and although you can still find them online from different vendors, Dell itself no longer sells it. Yeah, apparently the 2015 model ships with a slower processor than the 2014, but with improvements in other areas such as greater durability. So, considering I intended to order from Dell directly, it was somewhat of a disappointment, and was at first reluctant to buy the new model, but because of a huge price reduction a couple weeks ago of nearly a hundred dollars cheaper than what it was a few months ago, I decided to go for it, thinking that they are probably going to sell out, and even if they release a new and improved model for 2016, it's probably going to be much more expensive.

Well anyway, I've had it now for four days, and it is surprisingly much faster than I was lead to believe. Maybe it will seem slow to you if you're coming from a super fast high end model, but for me, compared to my old computer, a six year old Dell mini Inspiron Netbook, with 10 inch screen, one gig of ram and single core 1.6 GHz processor, it is lightning fast. And the screen quality is good too, despite many reviews stating otherwise. The only negative thing about it, so far, I would say is the track pad is a bit weird, and takes some getting used to, mostly with there being no traditional right click, but instead you click with two fingers on the lower center region of the pad. It's a bit tricky, and am finding that for simple copy pasting, I prefer the keyboard shortcut of control c and control v, it's much faster.

Anyway, other than that minor annoyance, which also could easily be solved by plugging in a mouse, I pretty much love everything about it, and am little by little learning the tricks of the Chrome universe.

Basically the biggest gamble of buying a Chromebook without trying it out first, was whether or not I would still be able to use it to make money online.

I do supplemental freelance work online, pretty much surveys and micro tasks, some of which requires Windows, Internet Explorer, and Firefox, things that Chromebooks don't have, but I found myself a workaround which has enabled my Chromebook to be able to do everything I need it to, at a much faster and more productive level than my old computer.

If you have a Chromebook or are planning on getting one, I would call this the most essential can't live without it browser extension you absolutely must install as soon as possible:

Basically if you have problems accessing a site or running an application using Chrome operating system, just use the user agent switcher, and there is a good chance that your problem will be solved.

Two other workarounds that I can think of, but which I haven't tried yet, would be to remotely connect your Chromebook to a Windows computer, where you do all your work on the other computer remotely via your Chromebook. Or you install Linux operating system, which will not only allow you to run additional web browsers, but will give you greater freedom in downloading a more extensive array of software applications not available to Chrome.

Anyway, I'm very happy with my purchase, it's a really nice little computer, at a very affordable price, and I will hopefully get many years of use out of it.
Posted by Cym at February 14, 2016
Labels: technology
Newer Posts Older Posts Home
Subscribe to: Posts (Atom)