Supposedly I have some Welsh blood in me, my Grandmother was born there, though I hear she was also English, so it's a bit of a mix, plus I'm other things as well, namely German which is what I most closely identify with. One of these days I'll take a DNA test to find out for sure. That will be interesting.

But anyway, it's interesting that I'm the only one in my family who has a Welsh first name. By the way, my blogger name is my real name, though a shortened version of it which I will never use here, but it's what I go by.

I don't know much about Wales, but it's interesting that I have a Welsh name, and also the fact that my Chinese zodiac sign is dragon, I was born in the year of the dragon, and if you didn't know, the Welsh flag features a red dragon, so that's kind of cool.

Here's a picture I found taken from Google, no idea who the photographer was to give credit to, but here it is: 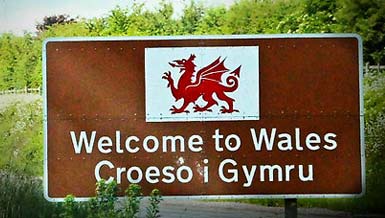 There's more to this story, but my energy is limited, and I cannot blog about my personal life right now. So that is all for now, but I'll be back soon.
By Cym at October 31, 2015 No comments:

Discovered this song today, and I really like it, so I'm sharing it here. Pretty much reflects my current state of mind, and where I'm presently at in my life, on the intuitive level of things. By the way, you don't watch it, you listen to it. In my opinion, the YouTube video format is a bit of a distraction.

This is a spontaneous insight.

A thought occurred to me today, a question, a speculation, just a thought, that sometimes what we watch on the news is put there not because it is newsworthy, but because someone paid money for a particular story to be aired, because they had a vested financial interest in one particular point of view being promoted.

Of course, right, but did it occur to you that maybe there's an underground market going on with the mainstream national news, where news is bought and sold like commercials, much of it totally scripted to fit an agenda. Not always political, but purely commercial. Meaning, that maybe people are meeting behind the scenes, to discuss the buying of national news slots, meaning we'll cover this story if you have enough money to pay for it.

The Martian movie is released, coincidentally there is a big story on the national news about finding new evidence of life on Mars, namely a source of water, which would make colonizing Mars a real possibility.

Speculatively, you could call it a covert infomercial, where the producers of The Martian movie made a deal with the network to air a news story, backed up by science, which would surely generate interest in and boost sales of their product.

Online fantasy sports betting is the latest rage. Stories of people winning millions, some making six figure incomes. I'm thinking wow, I don't really watch sports, but maybe should get into this. I used to play poker, but the site I used to play at got shut down by the Department of Justice. While there is still some legal online poker, it sucks compared to what it used to be, the earnings potential are just not worth it in my case, is heavily taxed, fewer players, etc.

But now we've got fantasy sports betting. Not necessarily new, but lately it's been getting a lot of media coverage. Just today I saw a segment on the news about a guy, with an economics degree, probably in his twenties, claiming to make a six figure income from it, and just this morning made $12,000.

I'm thinking wow, I've got to get into this. I've got a knack for this sort of thing, recognizing patterns, strong intuition, looking for profitable loopholes in the system. But then a spontaneous insight occurred to me about this particular news segment about the guy claiming to make six figures from this, that that kind of endorsement must surely be good for business, beneficial to the fantasy sports betting industry. Do you know how many sales that must have generated? Probably a lot.

Point is, maybe that story was planted. A person paid big money to show on national news a business from which they would personally profit from in a favorable light. It's like a sort of insider trading. How much does this happen? Probably all the time.

School shootings, overexposure of gun violence, bought and paid for by the anti gun lobby. There's all kinds of factors, but I'm beginning to think that the majority of news is bought, nothing more than a paid infomercial pretending to be news. 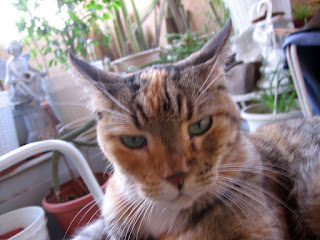 I'm in the process of adopting another cat, this lovely lady pictured above. Hoping it works out, as I have another cat, a larger cat, about twice as big as this one, and they haven't met yet, but we're hoping it works out.
By Cym at October 11, 2015 No comments:
Newer Posts Older Posts Home
Subscribe to: Posts (Atom)