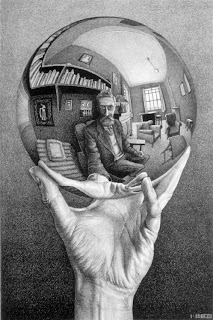 "We are all in the gutter, but some of us are looking up at the stars."
- Oscar Wilde.

Another saying which expresses a similar idea, put in a slightly different way: "Two men looked out from prison bars, one saw mud, the other saw stars."

The idea being that we are all doomed to die and will all experience misfortune at some point in our lives, but as long as we are still alive things could always be worse. We always have a choice how we respond to misfortune, we can either be optimistic or pessimistic. We can either have hope that things will change for the better, and actually try to do something about it, or we can give up in despair thinking that nothing can be done and things will only get worse.

Just because you are in an unpleasant set of circumstances now, doesn't mean you can't find something positive to think about or to be thankful for. That no matter how terrible things seem to be, as long as you have the capacity to think and to feel and to love and to hope, and have the ability to see, hear, taste, touch, or smell, there is always something out there to enjoy and to be appreciative of, even if it's something as simple as a flower, a breath of fresh air, or a cleansing shower, the stars in the sky, or a simple meal that satisfies.

The most difficult of all misfortunes though is when you are in a great deal of pain, when you are actually physically ill and dying, it is almost impossible to look on the bright side of things. I suppose in such a situation, you need to try to find your peace, to rise above the pain, if it is at all possible, and prepare for death. I don't know how to help you there. But if the condition is treatable, all energy should be focused on that, doing everything in your power to get well, to get the food or medicine needed to recover.

Health is the foundation of life, without it nothing else really matters; all else is lost without it. Anywhere there is suffering, if the issue is disease, or lack of food, clean water, shelter, sanitation and medical treatment, those issues MUST be fixed before any other improvements to one's psychological quality of life can occur. You can try to think on the bright side, but if you're starving to death the only thing that will help you is food. What you can do is try not to panic or freak out, but concentrate all energy toward the goal of getting what you need to solve your problem.

That's the main point of this post, that whatever problems you have, even if you live in a horrible place around horrible people, as long as you have your health, your other problems could be much worse, and although it may take some time, they are not impossible to solve. But if you have poor health, are sickly, injured, or in pain, you really need to address that first, before you can effectively solve any of your other problems.

Health comes first. Health is your number one priority. If you have your health, but not your freedom, or your happiness, be thankful for your health; because no matter what terrible circumstances you are in, as long as you have your health, freedom and happiness will always be possible.
Posted by Cym at February 11, 2012 No comments:
Labels: Aquarius, Featured Posts, Health, Inspiration, Waning Gibbous

I don't recall if I ever told the story here before or on another blog, about how I adopted my cat, or rather how my cat adopted me. It was back in 2002. I had a dog at the time, a black lab mix, which I had brought with me from Wisconsin, and had been with me for over ten years. Unfortunately my dog was a cat hater, so I couldn't adopt a cat until after he passed away, which was in the winter of 2003, over a year after my cat first showed up on the scene.

Well anyway, this beautiful medium longed haired black cat started showing up outside my home in the summer of 2002. It was a very assertive cat, very vocal, made his presence known right from the start. At first he would come by the windows, meowing very loudly, and pawing at them, trying to get in. When I went outside he came right up to me, standing up on two legs, putting his paws up on my legs, like a dog greeting its owner. In fact, he was very dog like, even followed me down the street like a little puppy. We'd take walks together around the block, and then he'd follow me right back home. Had a lot of close calls whenever I walked my dog, because the cat showed no fear and often tried to follow us, and my dog wanted to kill him. He was also a skilled tree climber and jumper, and regularly jumped up onto the roof of the house I was living in, and would perch up on the wall of my courtyard (which is basically just a walled yard with a gate). It's very common in southern Arizona, that most of the yards are walled in, rather than fenced.

So I befriended this cat, feed it, put a box outside for it, and visited with it outside every chance I could get. The cat came and went as he pleased, but always returned everyday, basically taking up residence on either my rooftop or in my courtyard. This went on for about a year. And when my dog died in 2003, I finally let him inside the house. He had neither a collar nor a tag, and since he had been living outside in this manner for over a year I assumed he was homeless. Well, soon after I let him in, I decided to take him to the vet to have him checked out, and to give him any necessary vaccinations. Fortunately for having lived outside as long as he had he was in perfect health, with no parasites, or diseases of any kind. But what the vet did find was a microchip.

Yes, the cat had been implanted with a microchip, identifying him as belonging to a couple who lived about a mile north of me. So, the procedure is, when a cat is brought in with a microchip indicating that they belong to someone else, the cat is basically put in lock down, and not allowed to leave until the owners are contacted, where they would decide what they wanted to do, whether to claim their cat, or to relinquish ownership. It turns out that the owners were Russian immigrants, a man, a woman, and a little boy. Apparently the cat hadn't been working out. He got along well with the woman, but not the man or the boy, but instead of finding a new home for him, they just let him go outside whenever he started acting up, and eventually he left and didn't come back. They had long since adopted two cats to replace him, two Russian Blues, and there was no way they could take him back, so they agreed to transfer ownership over to me, completely free of charge.

I always thought he kind of looked like a Maine Coon, but on second thought I was wondering if maybe he could be a Siberian Forest cat. I was looking at some pictures of Siberians lately, and I see a very strong similarity, not only in appearance, but also in personality. That would be very cool, if I happened to get a purebred cat, which often sells for over a thousand dollars, absolutely free. I'm thinking who would give away a thousand dollar cat for free? Well, they are Russian immigrants, maybe they didn't have to pay for it, but was a gift from a relative or something. You just never know. There's no paper work to verify it, but whatever the case may be, the similarity is striking.

It doesn't really matter either way, he is what he is, he's a very beautiful and much loved cat regardless of what kind of cat he is, but just thought it was kind of interesting. Looking at pictures of cats online, I seem to prefer the larger long haired breeds, especially the Maine Coons, Norwegian Forest Cats, and Siberians, and found it absolutely intriguing that I just happened to find a stray cat which not only resembles those breeds, but could even be one, and I didn't have to pay a penny for him.

Here's some pictures of my cat, some taken today, and a few older ones. 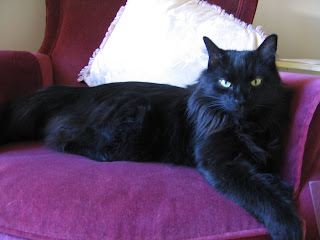 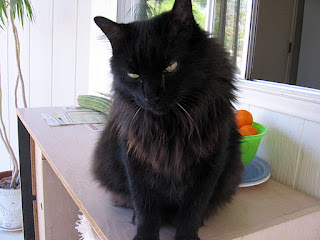 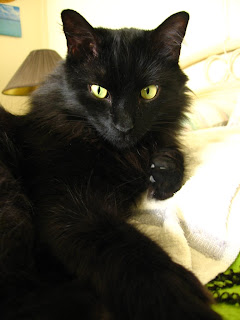