Well, a little late coming, but I managed to go for a short walk last night and took a picture of the super moon lunar eclipse rising over the Rincon Mountains. My camera is not very good at taking pictures of the moon, am really long overdue for a new one, so it's not that great, but this is the best picture I was able to get, and considering the fact that this will not occur again for like decades, I thought the moment deserved recording. 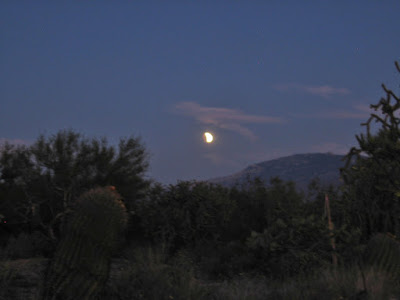 It was a nice night for a walk, a few people were gathered outside my apartment complex, but I took my walk alone. Kind of reminded me of the vibe, on a somewhat smaller scale, when I remember viewing Halley's comet back in I think it was '86. There was some end of the world hysteria associated with that too, just as there was to some degree with this one. But guess what, the world will end some day, whether that means planetary extinction, or destruction of the planet due to whatever reason, it's also called death, something we will all experience eventually, personally, privately, alone, even if the rest of the planet carries on alive and well without us.

Fears of the end of the world, end times hysteria, Armageddon, are largely fears of death itself, something that will definitely happen, but sometimes people feel more at ease taking comfort that they are not dying alone, but that the whole world is dying too.
Posted by Cym at September 29, 2015 No comments:

I feel a change in the air, do you? And I'm not just talking about the fact that today, or rather yesterday, was the first day of Autumn.

I'm feeling a shift in the world we live in. It's subjective. It's intuitive. It's completely unverifiable, but I feel it, and I guess you'll just have to trust me on that. I'm talking about Mayan Prophecies, and the procession of the equinoxes, that type of change.

Okay, we're in 2015, soon to be 2016, and all that Mayan prophecy stuff centered on 2012, but here we are three to four years later. I'm thinking the change is subtle. I'm thinking if in fact such a cosmic shift were possible, actually happened, and is happening as I speak, as I write, I'm thinking most people would probably be totally unaware of it happening.

I'm telling you, because most people are distracted by making money and other shallow pursuits, they are totally spiritually unaware of subtle changes cosmically affecting this planet. It's like intuition is a scarce resource these days. And I'm happy to say, that is one thing I'm rich in. But, the longer I live in this world, the more corrupt I become, my spirit is infected with the vice of coveting material wealth. It's sick. I got a taste of it, on a much smaller scale, what it's like when all you think about is making money, 24-7. And I'm not just talking survival mode, but continually thinking about making a profit. I can tell you from first hand experience, that when a person is always thinking about money, there is little room for anything else, and they are as far away as possible from spirituality, as far away as possible from the truth of the heart, reality, clarity, compassion, and enlightenment, those things which money cannot buy.

Anyway, I sense this change, and I also sense that most people are living their lives as robots, even though they have friends and raise families, people for the most part are completely living in ignorance. Anyone that sees it, or wishes to find a way to prosper in such an environment faces many hardships, but that's all part of waking up. Waking up is like being born again. It really is. It's difficult, a life or death situation, you may not make it, any baby being born faces the obstacle of not making it, of dying prematurely.

Most people are asleep, programmed to act without thinking, running on automatic insanity. Money, get rich by accumulating piles of money, it's a numbers game, stock market casino slots, Wolf of Wall Street, cheat the suckers for a quick easy buck, nothing else matters but money and the instant gratification of getting fucked up, buying the most expensive things, and yet ironically enough dying with nothing, as a hollow shell, a lifeless trophy on the wall, that's all you get when all your thoughts are obsessed with money, and the status that you feel that money will gain; it's a losers game.

Materially rich and materially poor alike, are both easy victims. One wears a suit and tie, the other rags, yet both covet wealth, more than they need. Yes, it's true, just because you're poor, doesn't make you noble. Doesn't make you innocent. Doesn't make you just. Some people who are poor, if they had the chance, if they had the money, they would become just as psychopathic as the most greedy, wealthiest, fat cat in the world. Trump that. Greed is a disease, that is just as likely to infect the poor, as it is to infect the wealthy. No one is immune.
Posted by Cym at September 24, 2015 No comments:
Newer Posts Older Posts Home
Subscribe to: Posts (Atom)