We're having a thunderstorm tonight, which is a great thing, being that we haven't had a good rain in weeks. Well, don't know why, but it triggered a memory of my first kiss. Or rather, the first time I was kissed by a boy my own age, who wasn't a family member. It wasn't mutual, just a peck on the cheek, but I would say it qualifies as a first.

I was in kindergarten, attending this school (here's a picture): 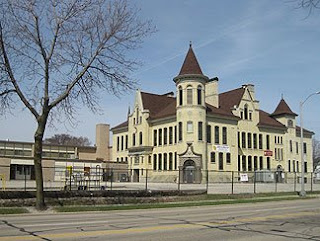 Yeah, that's where I went to kindergarten, but we moved, so I didn't continue on there for first grade, was transferred to a different school. Kind of an interesting looking building though, historic, probably from the late 1800s.

Anyway, as to the first kiss. I lived a few blocks away from school, and usually my mom picked me up, but a few times I walked home alone myself. One time, walking home, a fat boy in my class, not actually in my class, but around my age attending the same school, came up to me, and said he had a secret to tell me. So I come over to him, and lean in close, and he starts to whisper something in my ear, but doesn't say anything, only pretends to, and the next thing I know, he's kissing me on the cheek.

Apparently that was the secret. But here's the kicker, the next thing he does is punch me in the stomach. And then walks away. And it hurt, and I cried, and I couldn't understand why he did it. I had never seen this person before, certainly didn't do anything to justify it, it was just totally out of the blue and unexpected.

I go from being confused, to flattered, to being a victim of bullying, all within a matter of seconds, and all at the innocent age of five or six. Perhaps you could call it an early traumatic experience for an extremely sensitive child, born into the wrong world, amongst a plethora of ignorant fools, fat asses with way too much clout, bully's with way too much wealth and privilege. Yeah, I'm extremely annoyed with fat asses. And there's nothing worse than an arrogant fat ass, a fat ass without humility or respect. Nothing worse.

I watched the Republican debate yesterday, only because I was in a Jerry Springer Show watching type of mode, in the mood to be entertained by a freak show, with Trump taking the center stage. Yeah, I watched it only to see him, even though I would never vote for him, he was the most entertaining. The only thing missing from that circus freak show act was Caitlin Jenner HIMSELF (a self-avowed Republican, by the way).

What a pack of losers. I won't be voting for president this coming election. I want out. For the time being, I've decided to drop out, and perhaps go live on a mountain top somewhere far away from people. That is my secret wish. Though surely, a sweet kiss, followed by a sucker punch to the stomach.