By Cym January 01, 2015
Was a cold night in the desert. It rained and then it snowed. I sat outside around 10:30 ish last night, wearing two pairs of pants, a wool shirt, a sweater, a fleece jacket, and a raincoat, plus hat and gloves, and I was still cold. And I'm from Wisconsin, but uh, I've been here awhile, my blood has thinned out.

At that time it was about 35 degrees F, and it eventually plummeted below freezing. I sat outside, drank a beer, watching the snow, realizing that the cold weather doesn't really agree with me, realizing that my occasional talk about moving back North to a colder climate would be a bad idea, and dreaming about inheriting some money and moving down to South Florida, like today, if I could, because the weather there is ideal right now.

It's funny how only in the dead of summer, when temperatures around here get hotter than 110 degrees, and you feel like you're melting, and suffocating, and you've died and woken up in hell, only then do I think about moving back to Wisconsin, or going even further north up into Canada or Alaska, or Scandinavia, and immigrating to some place like Copenhagen or Stockholm, but then I remember, that once I'm there, once the heat retreats and it's cold, which happens a few weeks out of the year here, I'm once again dreaming about the sunshine and beaches and longing to be someplace warm.

So, I quickly finish my beer and go in, watching not a DVD this time, but a little bit of the Twilight Zone marathon on Syfy, reading, drinking another beer, and then going to bed. But around 12:30 am, I hear a strange crash, not quite sure what it was, I never heard anything like it before, sounded like a huge herd of javelina racing by at supersonic speed. I look out the window and the beautiful tree next door, half of it, has crashed to the ground, is split part way down the trunk. I get dressed, go outside, examined the damage, and took a few pictures. This is what I saw: 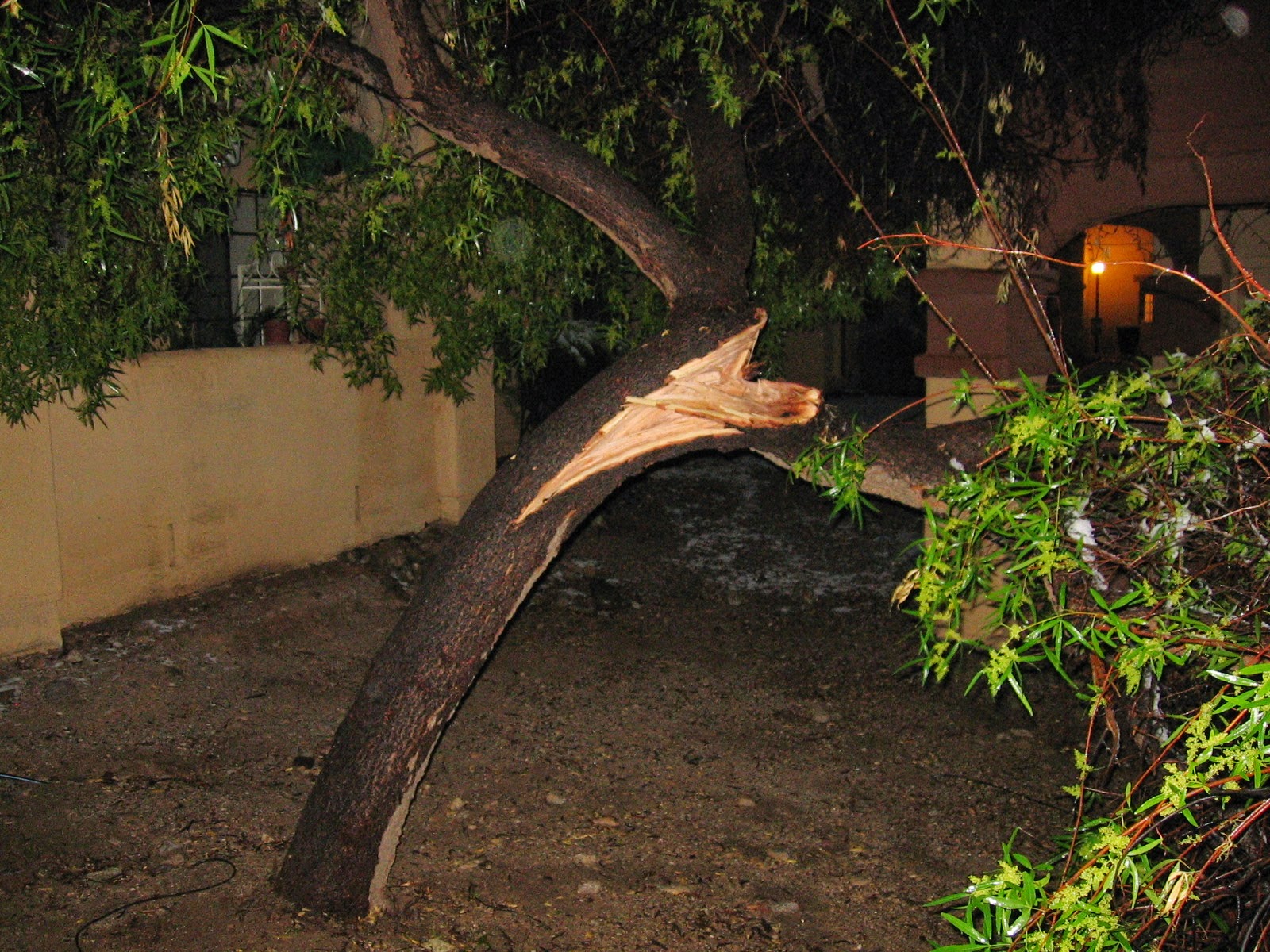 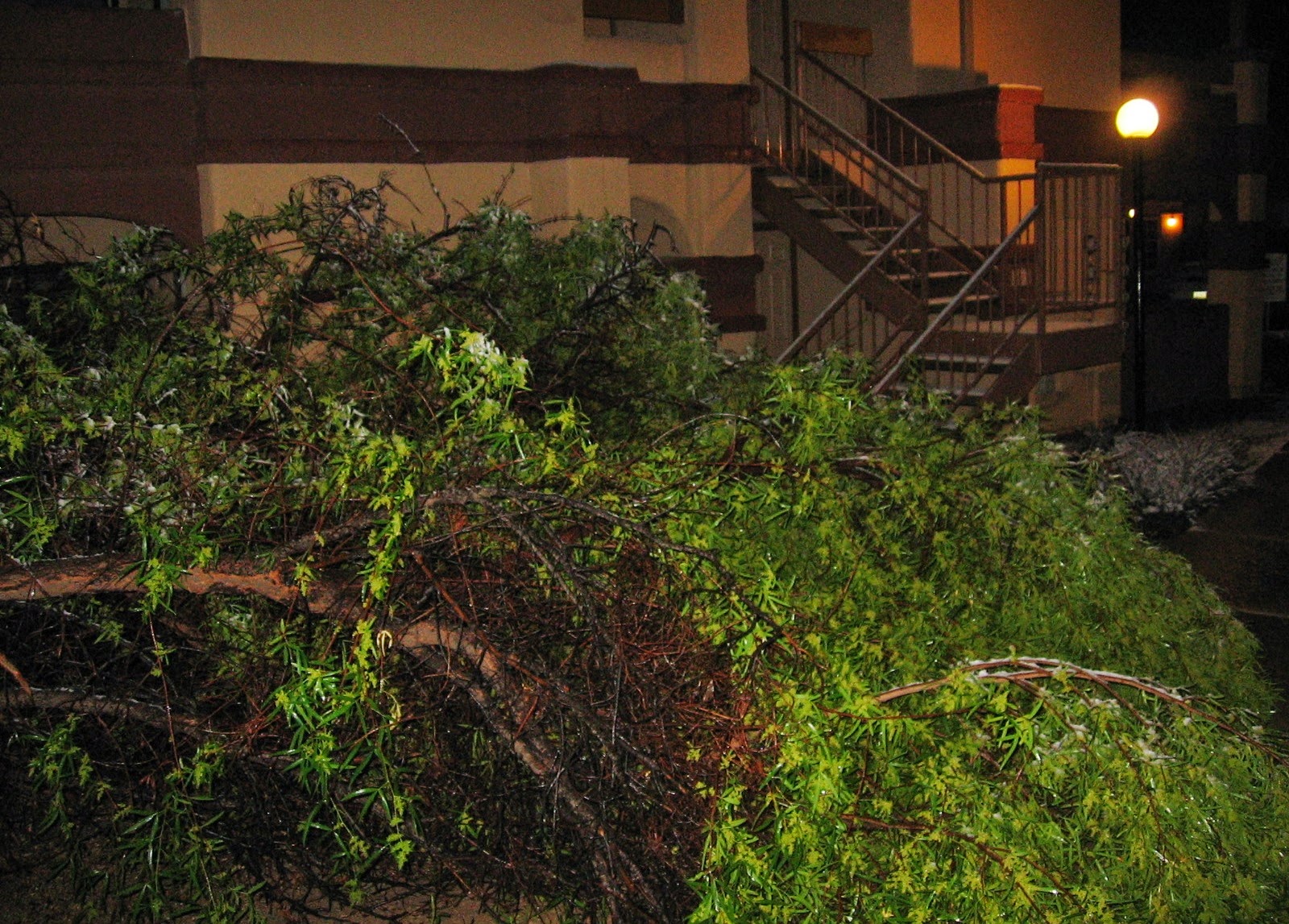 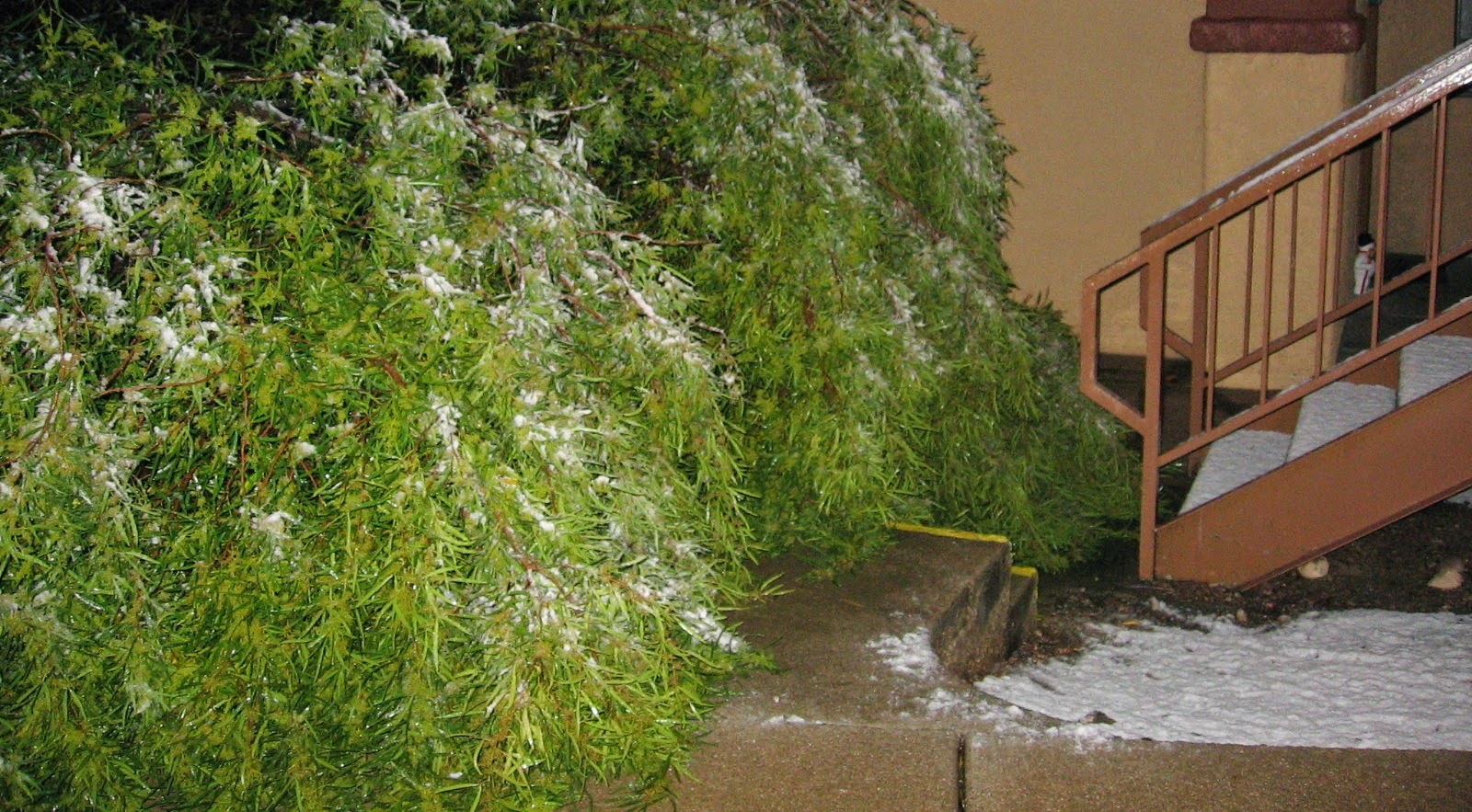 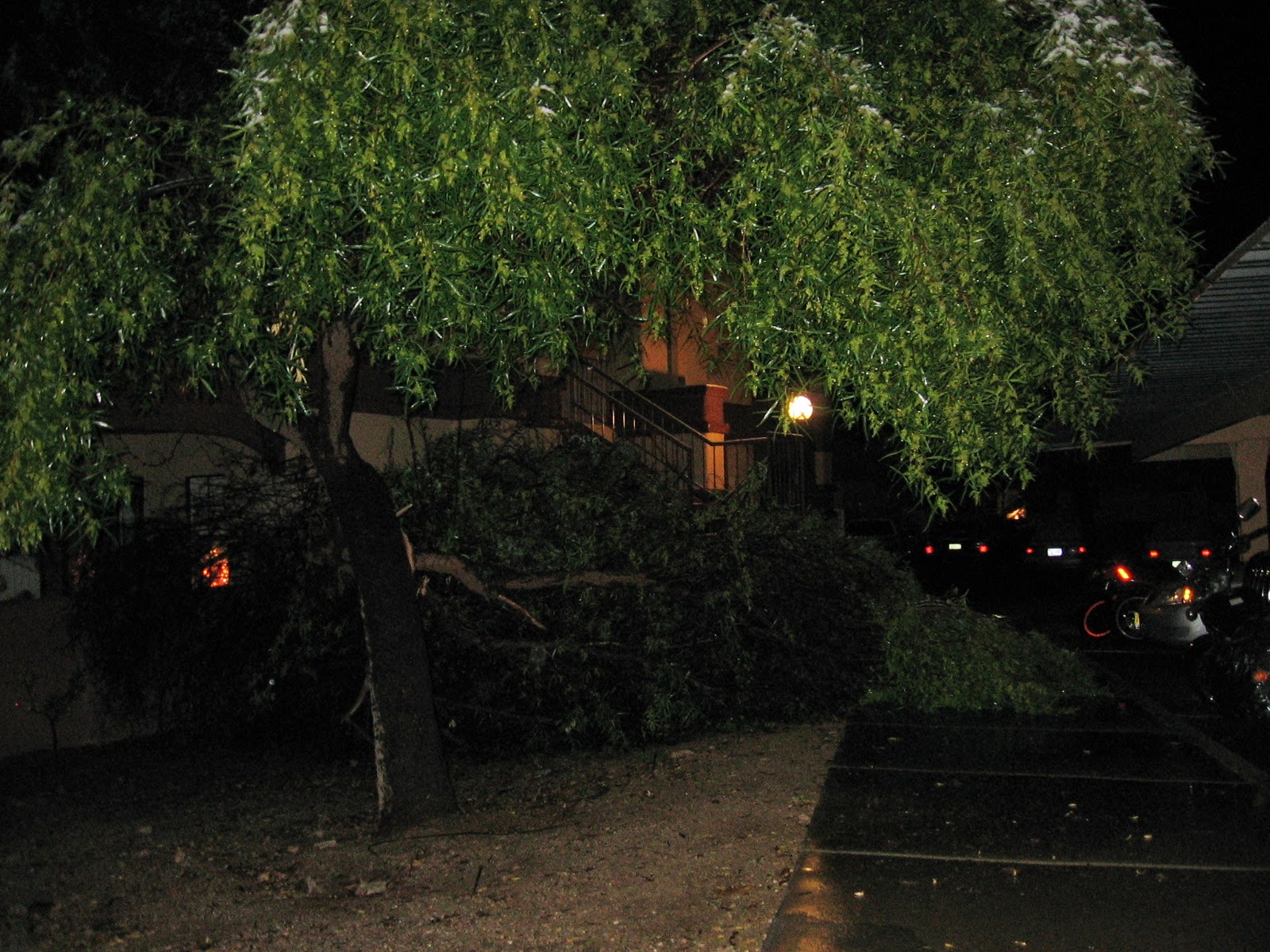 This tree was/is a major asset. Is nice to look at, is the home to families of birds, some of which may have died in this accident, is a major source of privacy screening, a wind shield, and a source of shade in the summer. I just hope there is enough of the tree remaining that they won't have to remove the entire tree, but just the damaged part of the split, that the rest can be salvaged and given a chance to recover. I'm hoping, really hoping that this tree will be saved, otherwise it will be devastating, definitely a sign to move once the lease is up, or sooner if inherit some money, which may or may not happen, it's possible, but still somewhat of a long shot.

What a way to start the new year. I was happy to watch the snow, it's exciting when that happens here, because it rarely ever does, but never expected such a bad thing to come from it. It must have been the weight of the snow and ice, and the fact that the landscape company here is a piece of shit, fools that make a bigger mess than what they are sent to clean up, and it wasn't being properly maintained, should have been thinned out a bit. It was neglected. That is my theory. That had the tree been properly pruned by a certified arborist, this could have been prevented.

Well, that's all for now. I may have something more uplifting to say later. And maybe sort out what to do with this blog in 2015. Work out my resolutions. Make a list? We'll see. You know I like my lists: an INTJ personality quirk, perhaps. Talking to myself on a blog read by strangers is another one I guess.
Capricorn