Actually, it's the largest spider I've ever seen in my life, witnessed tonight, a couple hours ago, while sitting outside on the patio: my first Tarantula sighting!

Okay, it was pretty cool to see, but not up close, let me tell you, I almost had a heart attack. I'm sitting out there in the dark, barefoot in sandals, because I stubbed my toe really bad, it's all black and blue, can barely walk; it should be better by tomorrow, hopefully, because I've got a lot of miles to walk. Anyway, I'm sitting out there not more than twenty minutes drinking a beer, reading a book with my headlamp, sneaking a peek at The Hidden Persuaders; yeah that's what I was looking at at the time, and thinking to myself, hmm, maybe one of these nights I'll sleep out here. True story.

Well, pretty much right in the midst of thinking that thought, I see something out of the corner of my eye move to my left inside the patio with me. My first thought is that it was a lizard, a little gecko, totally harmless; either that, or a maybe a cockroach, but no, I shine my light over at it, and it's a HUGE spider, no exaggeration, in fact, the largest spider in Arizona, a Tarantula. It's the first one I've ever seen in the wild, and it was right next to my foot, literally inches away. Makes me wonder where it was that whole twenty minutes I sat outside. Perhaps under my chair, behind my foot? Who knows. Good thing it didn't run up my leg, or else, I very well may have screamed bloody murder, and had the police called to the scene. Seriously. It was after eleven o'clock at night, and very quiet and dark outside, anyone screaming is bound to attract attention.

What did I do?

I immediately stood up on my chair, tapping on the window for help. Yeah, cowardly, I know, but that is what happened. Hey, I was injured, in open toed sandals, encumbered by beer and book, wasn't about to leave them out there, I needed help.

So anyway, after getting inside, I managed to take a few pictures, but they're not that good, as they were taken through the sliding glass window and screen. I didn't have my camera outside with me, or else, I would have attempted to photograph it from my safe perch on top of the chair, and there was no way I was going back out there. But at least I captured the moment as best I could. The spider pretty much froze in this spot next to the wine box for like five minutes, and after that it walked around a bit, acting like it was going to leave, but actually at one point, it circled back, and was right on top of the screen door of the patio, acting like it wanted to come in! It was a pretty exhilarating moment! 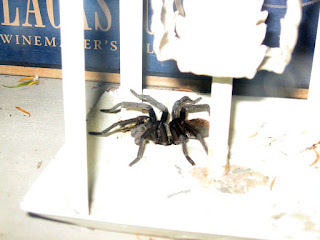 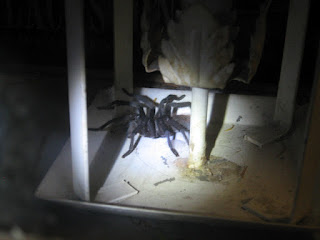 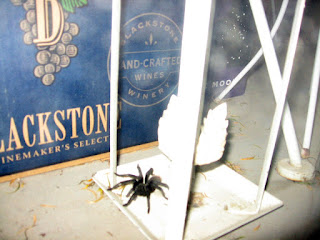 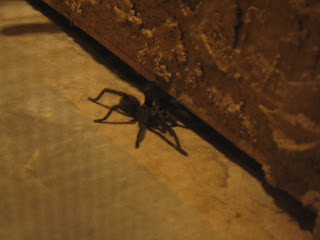 The thing is though, I don't know where the spider ended up, for all I know, it could be hiding in a corner, taking up permanent residence. So, all I can say is, I'll be wearing enclosed shoes from now on; that's for sure. And turning on the patio light before going outside. Yeah, I'm a big baby. Like I said, I don't like spiders.

*This is post 6 of 20, part of my "20 posts in 30 days" challenge. What is up with all the spiders that have been showing up on this blog? Seems like a lot, doesn't it? I'm not even planning it, I'm just reporting what I see, whether it is in real life, or in my dreams, spiders have been showing up a lot lately. Wonder what I'll see next?
By Cym at September 13, 2012
Labels: 20 posts in 30 days, Virgo, Waning Crescent
Newer Post Older Post Home