I've had the good fortune these last couple of years of having my bedroom window overlooking a mesquite tree and a couple of creosote bushes, which has been home to several generations of round-tail ground squirrels.

Never before in my life until moving here have I had this opportunity to observe several evolving generations of squirrel families. I've seen these primarily vegetarian omnivores fight each other to the death, kill and eat birds and reptiles, even resort to cannibalism.That is not a regular occurrence, but usually only happens due to extreme weather conditions, excessive heat and drought, when food or water becomes scarce, and both animals and people alike may be driven to madness. Under more normal conditions I've seen dozens of babies peacefully playing together like puppies, learning to climb trees, wrestle each other, burrow holes in the ground, forage mesquite seed pods and creosote blossoms, and generally learning how to fend for themselves.

Here are some pictures of the latest generation. 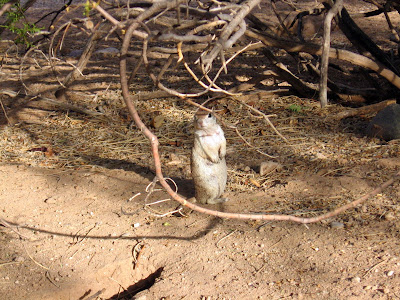 This picture reminds me of a scene right out of one of my favorite childhood story books called The Wind in the Willows. If you haven't read that yet you should, it's a great book. One of Pink Floyd's early albums The Piper at the Gates of Dawn was named after a chapter in that book.

This little squirrel appeared to me as if he were the village messenger coming out to greet me, intermittently sending out its high pitched alert signal whistle, and checking me out seeing whether I posed any kind of a threat to the round-tail ground squirrel village community. 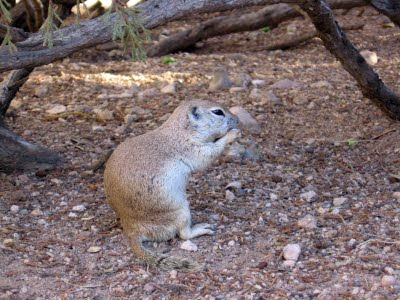 I do not pose any threat whatsoever, but unfortunately I cannot say the same for some of my asshole neighbors, who appear to be at constant war with the wildlife, viewing them as pests to be eradicated, rather than as friendly peacefully co-existing neighbors who actually have more of a natural born right to this land than they do. This is their home, where else do you expect them to live? And yet they take away their food source, tell people not to feed them, spray poison all over the place, for no other reason than just because some people associate them with "dirty rats" and don't like to see them. 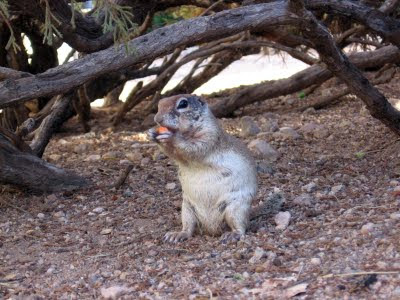 There are admittedly some legitimate concerns when removing animal and insect pests may be warranted, for instance if they are damaging crops, property, or are a genuine threat to public health. But in this case, these squirrels pose no threat, are living in the place they are designed to live in, in the most natural most suitable way they know how to live. And yet some idiots don't care. They don't like them, and for them that is reason enough to destroy them all. People can be really stupid sometimes. Don't even get me started on one of my weed killer rants. I'll save that one for another day.
Posted by Cym at July 08, 2011
Labels: Arizona Wildlife, Cancer, Featured Posts, Nature, Walkabout
Newer Posts Older Posts Home
Subscribe to: Posts (Atom)